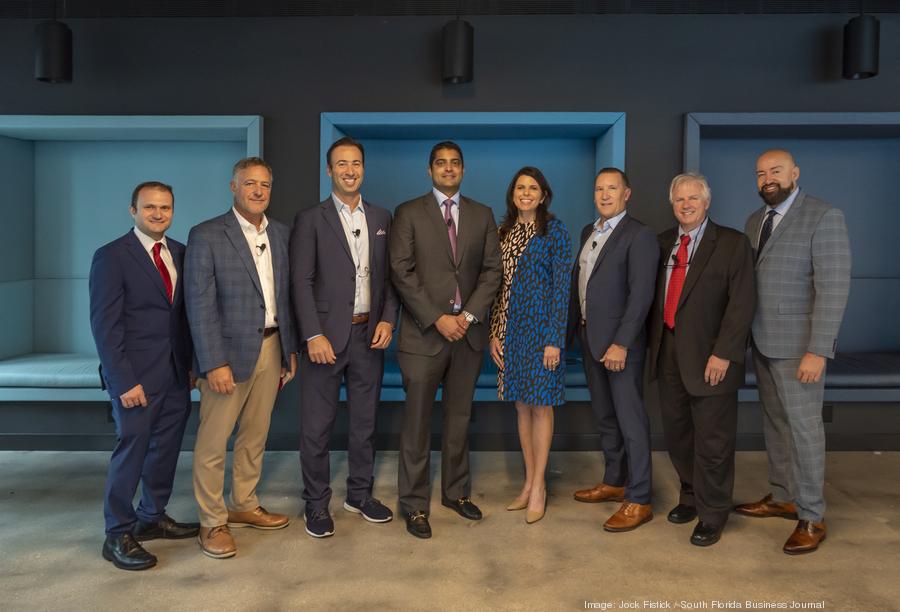 Real estate investors have reason to be cautiously optimistic going into 2020, as population growth can create lucrative opportunities in slowing sectors, panelists said at the recent Breaking Ground with Brian Bandell: 2019 Market Review.

Sectors such as industrial and office space will continue to thrive across the tri-county region, as trends point toward improvement in segments including residential and retail.

Held Dec. 13 at Brickell City Tower in Miami, the sixth annual Market Review provided an overview on the state and future of South Florida’s retail, industrial, office and residential markets by some of the top players in those sectors.

South Florida’s overall real estate sector will remain robust, but its the industrial market that’s primed to show the most growth in 2020.

That was one of the chief takeaways from Breaking Ground with Brian Bandell: 2019 Market Review, held Dec. 13 in Miami.

Malcolm Butters, president and co-founder of Butters Construction & Development, is at the forefront of that growth. He’s put together over 200 acres with a potential buildout of 3 million square feet of industrial space in Miami-Dade County alone.

“With industrial [development], we got lucky in some respects,” he said. “We’ve been doing it for so long.”

Even with all the development in municipalities such as Medley, Butters said the real growth for industrial space could take place in western Palm Beach County. The area has been mostly farmland for generations. But with space for industrial parks becoming scarcer, developers have to be creative about where they look for those opportunities.

Third-party logistics companies and freight forwarders are drumming up even more demand for industrial space, as it relates to e-commerce, she added.

Besides e-commerce, Butters said industries like aerospace, construction and food manufacturing have contributed to the industrial development boom.

“Unfortunately, we’re not really the center of distribution like Orlando is, but we have a lot of different industries,” he said.

One real estate market often perceived as slowing is retail.

But John Ebenger, director of real estate tax services at Berkowitz Pollack Brand Advisors + CPAs, thinks the idea that “retail is dead” is hyperbole. He noted that his clients purchased more retail space than they’ve sold in recent years.

“[They] continue to buy properties and then reposition them,” Ebenger said. “The migration and aging of people has created more of a need for retail services … [so projects] taking advantage of this need are what’s creating the value.”

Nitin Motwani, managing partner of Miami Worldcenter Associates, oversees about 300,000 square feet of retail development at that project alone. He said retail is still a viable real estate sector, but developers need to bring on more experiential retail, not cookie-cutter shops that consumers can find anywhere.

“I think what you’ve seen is people say they don’t want that anymore,” he said. “We can’t just make it a widget. It has to be an experience that is different from everything else.”

Another real estate sector that could struggle in 2020 is apartments, along with residential projects such as high-rise condominiums.

Rocco Ferrera, chief investment officer for Stiles Corp., worries developers have overdelivered on multifamily projects in recent years. That means it could take a few more years for demand to catch up with the existing supply.

Arnaud Karsenti, managing principal of 13th Floor Investments, views the condo market as two different subsects: the investment side and the practical side. In recent years, developers have been building high-rise condos to sell to investors.

Population growth is spurring the demand for condos for the average worker, so developers will eventually have to build product that’s more affordable. These condo projects are harder to sell since buyers often want to see the finished product before they buy, but its the kind of investment South Florida needs it if it wants to continue to grow as a major metropolitan hub, he said.

The region will also need more office space it it wants to accommodate a growing workforce, making office development another potentially lucrative boon in 2020, Ferrera said.

Still, it’s a changing landscape, as tenants make demands different from those made in decades prior. For example, tenants now often ask are for shorter leases, usually about five years, and smaller spaces.

“Long term, I feel that, as tough as it is to develop, office as an investment class in this market is a really good move,” Ferrera said. “There is demand because tenants need space.”

The prospect of industrial development seems promising in theory.

But, in reality, prices for optimal parcels of land have steadily risen in recent years, making it more cost-prohibitive for developers that seek to build industrial properties, said Malcolm Butters, president and co-founder of Butters Construction & Development.

“Supply and demand are in balance, but it’s getting really expensive,” he said. “There’s no easy money.”

For example, a parcel he is looking to develop in Doral is selling for between $1 million and $1.2 million an acre. In Miami-Dade County, land can go for about $150 a square foot – one of the main reasons he’s begun to look toward Palm Beach County.

“[At those prices], if you’re thinking of doing a merchant build and then flipping it, the profit margins get squeezed,” Butters said.

Arden Karson, CBRE’s senior managing director of South Florida, pointed out that rising retail rents have forced smaller brands out of larger metropolitan areas. CBRE data shows that, in Miami-Dade County, the average per-square-foot asking rent rose by about 25% over the past five years, despite a climb in the vacancy rate.

Arnaud Karsenti, managing principal of 13th Floor Investments, said the problem with rising prices is the process itself – mainly because real estate professionals get overexcited at the prospect of incoming demand and tend to overdeliver.

“It’s not the asset classes that are scary as much as the manner in which people are proceeding to develop them,” he said. “I think it has more to do with that margin of safety, and those who are able to be a little more prudent will withstand whatever bumps in the road, regardless of the asset class they are in.”

South Florida will continue to see a swell of transplants from northern states in the coming decade, a trend that will produce a plethora of business opportunities for residential real estate developers.

But equally as important will be the surge of new companies opening in or relocating to the tri-county region, said John Ebenger, director of real estate tax services for Berkowitz Pollack Brand Advisors + CPAs.

This mass migration of money and workers will likely spur more residential and office developments to start, he said.

It could also translate into new forms of development, Miami Worldcenter Associates Managing Partner Nitin Motwani said. For example, workers from other states are used to varied public transportation options, meaning more transit developments could be in the pipeline.

“I think, if we’re just talking about 2020, it’ll be very micro-oriented. The focus will be on supply in very particular areas,” Motwani said. “But I think [by] 2025, the amount of people moving here is only going to get bigger.”

The residential sector has the most to gain, said Arnaud Karsenti, managing principal of 13th Floor Investments. Developers may have recently overdelivered on condominiums and apartments, but those now-vacant buildings will be able to absorb the influx of new residents.

“I think there is a really big opportunity in addressing the fatter part of the pyramid, which is housing,” Karsenti said. “Not necessarily in the higher-end residential, but in the middle-market projects that cater to median-income single families.”

“Population growth has really been the story of Florida ever since they invented air conditioning,” he joked.

QUOTABLES: What neighborhoods do you think are on the verge of a major growth spurt?

“Every day that I go through Wynwood now, I’m just impressed. It really is live, work, play, stay, shop and eat. It’s everything.” – Arden Karson

“What’s happening in [Miami’s] Allapattah, Little Haiti and Little Havana is part of a maturing market. The questions is: How long will it take?” – Nitin Motwani

“I think you can almost pick a dot on a map in South Florida and develop it. It’s just about how you go about it.” – Arnaud Karsenti

“I’ve seen things in Dania Beach I never thought would happen. Hollywood, although it kind of stops and starts, I think it’s really about to change.” – Rocco Ferrera

“I’ll just keep moving farther north, because I was going to mention Delray Beach. I think what you’re hearing is that it’s all about the opportunity, not driven just by the location.” – John Ebenger

“A lot of the stuff and opportunities we see are all out west. I’m really bullish on the western half of Palm Beach County. All that land eventually is just going to go.” – Malcolm Butters