Samet Corp. of Greensboro, in partnership with Butters Construction and Development, will develop a new 350,000-square-foot speculative building on 30 acres in Triad Business Park in Kernersville. 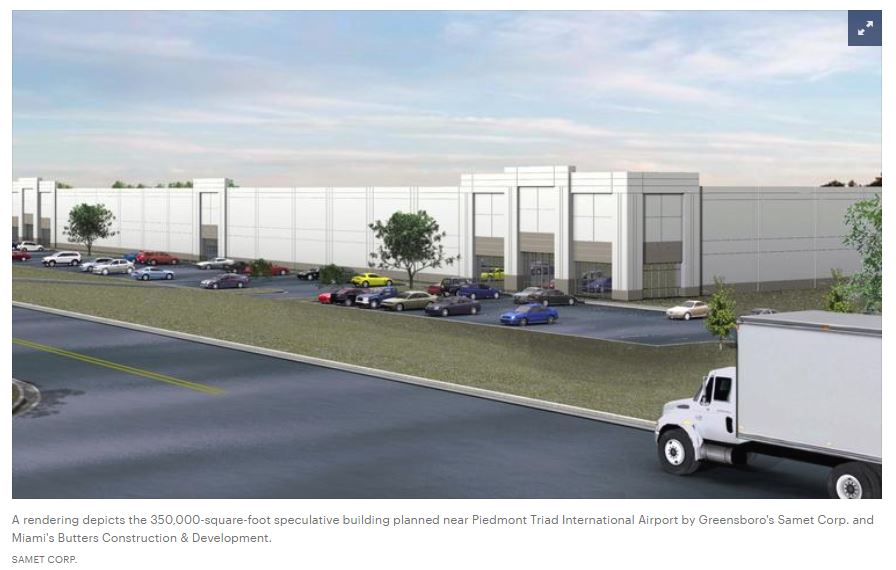 For the second time in less than a month, a Triad general contractor is kicking off a speculative project, except this time the project is nearly three times as large and will be built in partnership with one of South Florida’s dominant general contractors. Samet Corp. of Greensboro, in partnership with Butters Construction and Development, will develop a new 350,000-square-foot speculative building on 30 acres in Triad Business Park in Kernersville.

The building is scheduled for completion near the end of November in the park, a 373-acre development near Piedmont Triad International Airport that required an extensive collaboration between the city of High Point, Forsyth County, Guilford County and the Town of Kernersville. Samet, which made the announcement late Monday, said the building would be able to house multiple tenants down to 100,000 square feet. Parking is planned with 203 paved spaces and potential to expand.

The partners did not disclose the estimated investment in the project, but speculative construction in the Triad typically ranges between $35 and $50 per square foot, which could put the construction cost at between $12.25 million and $17.5 million. The design of the facility will be geared toward manufacturing, distribution, office and other industrial uses, and incorporates office, storage and warehouse space. The building is planned to have 32-foot ceilings, 48 feet by 50 feet column spacing and constructed with tilt-up concrete.

Triad Business Park is adjacent to I-40, FedEx Ground and a short drive to Piedmont Triad International Airport. The park is anchored by the FedEx hub, a $110 million project that opened in September 2011 and was expanded in 2014. The corporate park, spanning 456 acres, ranks as the Triad’s sixth largest in size and only had about 65 acres remaining to be developed as of last summer. “Our goal with this new spec building is to provide professional and flexible space for several end-users in the best location in the Triad,” said Brian Hall, Samet’s director of development. “The company or companies who occupy this new building will have a 100-percent exclusive facility including a truck court, employee parking, and most importantly, complete flexibility to plan for their long-term growth.”

Samet has a long history of speculative projects and has ramped up such efforts over the past year. About two weeks ago, the company gained rezoning approval from Mebane City Council, allowing it to go ahead with a 134,000-square-foot. The two newest projects are the latest in a string of successes the company has had in developing speculative buildings across the Triad, from several in Alamance County alone to a spec building in Greensboro that was quickly sold to apparel retailer Simply Southern. The Simply Souther project was, like the new 350,000-square-foot spec, developed under a partnership, in that case with M&F Properties, which involved local investors Michael and Frank Brenner.

Butters is headquartered in Coconut Beach, Fla., in suburban Miami. Butters is a vertically integrated real estate service company engaged in construction, development, leasing and property management. The company has assets in the industrial, office, retail and hospitality sector. Its projects include an Amazon facility in Miami. “With the growing importance of e-commerce, the proximity to the adjacent FedEx hub, and the central location of Greensboro, we feel that this asset is perfectly positioned to serve the vibrant industrial market,” said Malcolm Butters, president of Butters Construction & Development.

The company is one of South Florida’s top general contractors in terms of construction volume, according to research by the South Florida Business Journal, a sister publication. According to that publication’s General Contractors Top 25 List, Butters ranks No. 14 in that market, with nearly $90 million in gross billings in that market in 2017. The company had a total of $166 million in contracts awarded for the year, with $13.53 million in contracts completed in the year. It employs 50 people in the market.

Based on Triad Business Journal’s Top 25 General Contractors List published earlier this month, Samet is the larger of the partners. It had $117 million in billings in the Triad in 2017, ranking as the region’s fourth-largest general contractor, and had $290 million in billings across the state for the year. Samet, which was just recognized last week as one of Triad Business Journal’s Family Business Award recipients, was founded in 1961 and employs 95 people. Beyond its Greensboro headquarters, it has offices in Raleigh, Charlotte and Charleston, S.C.

Just as Samet has been active in the Triad market, including as the general contractor for a planned baseball stadium in High Point, South Florida’s Butters Construction has also demonstrated some recent successes. The company, along with Bristol Group, developed Deerfield Beach’s Hillsboro Technology Center, which recently landed the new headquarters for The Learning Experience. The partners in February broke ground on 275,000-square-feet of new construction as a second phase of the 900,000-square-foot industrial park. The first phase, including a 260,000-square-foot industrial building and a 90,000-square-foot office building, is 95 percent leased.

Butters also is a partner in a deal to build a 106,000-square-foot industrial building in South Florida that will host Seafood distributor Marine Harvest ASA and support up to 100 new jobs. It is also part of a joint venture that recently broke ground on a Residence Inn by Marriott in Coconut Creek.